In this post we’ll look at how to use the filter and map functions in JavaScript and why you would use them.

For the below examples, we’ll consider the situation were we have the following data about some people:

This data represents the sort thing you would expect to deal with when handling API responses that use JSON, i.e. Arrays of Objects.

The filter function is called on an Array, takes a Function as input, and produces another Array as output. The input Function is called for every element in the input Array, and returns either true or false on whether it should be included in the output Array.

Using the people data, we want an Array of all the people who are 18 or older. If you didn’t know about filter, you might do something like this:

We can implement the same functionality with filter like this:

This can be made even more concise using an Arrow Function:

You aren’t limited to just filtering Arrays of Object. Any Array can be be filtered. Here is a sneaky trick you can do.

Recall that in JavaScript we can force values to be a boolean using the !! operator. This is performing the not operation twice, which cancels itself out. However, in the process, the first not operation converts it to a boolean, and the second not operation undoes the first, leaving us with the boolean value of the input.

Why do I bring this up? Because we can use this trick remove these “false” values from Arrays with filter.

Even better though, we don’t actually need the the !!. The filter function doesn’t require us to return true or false explicitly. The value we return will be forced to a boolean using something like !!.

Where else might this be useful? Removing empty strings from Arrays maybe:

We can remove those annoying empty strings with filter:

We can even do it on the same line: 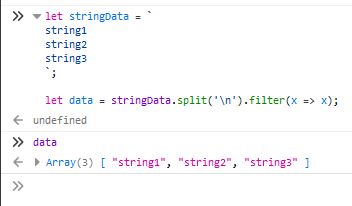 If we have an Array of numbers and wanted to calculate the square of each number, we could do something like this:

We can implement the same functionality with map like this:

This can be made even more concise using an Arrow Function:

A Better Use Case

A much better use case is when working with Arrays of Object. Using the data at the start of this page, let’s see how we could get an Array of all the people’s names:

We can combine filter and map to produce some short but powerful operations.

Using the people data again, let’s produce an Array of the names of people who are under 18:

More information regarding filter and map can be found here:

In this post we’ll look at how to build a Plexus in JavaScript using the p5.js library. What we are Making How we will make it Setup p5.js Points Generating Po...

This page will demonstrate how to setup Web Workers, dispatch tasks to workers, and send messages/results from workers to the main thread. HTML Page Worker Code Example Output HTML Page ...

In this post we’ll look at how to implement the FABRIK algorithm in 2D in JavaScript using the p5.js library for drawing. The Forward And Backward Reaching Inverse Kinematics (FABRIK) algorithm is ...